Vitamin C and Curcumin in a Single Dose

Turmeric which is a rhizomatous herbaceous species whose scientific name is Curcuma longa belongs to the Zingiberaceae family.
Vitamin C:
The sources of Vitamin C and Curcumin are different. Both belong to different classes of manufacturing and occurrence. But still, these two are written in the same aspects and the reason behind this is the similarity in the functions of both of them. Vitamin C can be extracted from an animal source or plant source. As per your fond whether you are vegan or not you can choose these supplements according to your interests. Vitamin C can be obtained from citrus fruits such as orange, kiwi, lemon, guava, grapefruit, and vegetables such as broccoli, cauliflower, russel sprouts and capsicums are rich, natural sources of vitamin C. Other vitamin C-rich fruits include papaya, cantaloupe and strawberries. But curcumin can only be extracted by Turmeric which is a rhizome in nature. 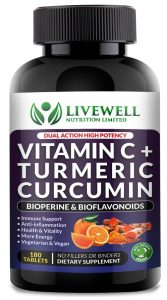 How Vitamin C and Turmeric Curcumin Falls on One-Step?

Vitamin C and Curcumin play their role to delay the process of aging by implementing the following changes in the body:

Vitamin C helps to boost your immune system by doing various changes in the body. The immune system is a natural system that gets activated whenever a foreign particle known as an antigen enters the body. The main system responsible for the functionality of the immune system is the white blood cells which further divide into macrophages, neutrophils, and natural cell killers. Vitamin C firstly increases the production of these cells which directly makes the system strong.

At this point, the curcumin shows its effect by using its property of anti-Oxidation. To maintain the system of the natural immune system we need to keep our natural cells alive and for this purpose, we need to prevent the natural system of oxidation which in turn produces free radicals. These free radicals are harmful to the body. Curcumin stops the process of oxidation and vitamin C can perform its function with its full strength. Vitamin C also contains the property of anti-oxidation but the submission effect of Curcumin and Vitamin C is more effective.

Gout arthritis and rheumatoid arthritis are the two forms but both cause the same disability in humans. In both the condition the person feels pain while walking and movement. In Gout arthritis, the accumulation of uric acid occurs and this causes inflammation of joints ankles, and bones, and bones to become brittle and it causes unbearable pain.

While rheumatoid arthritis involves self-destruction of body cells due to the wrong attack by the immune system and this leads to inflammation of joints and muscles become stiff. Now Curcumin and Vitamin C take over and perform their functions. Firstly, Vitamin C can remove the uric acid from Red Blood cells and excrete it n the urine and this is how Gout Arthritis is treated. Now rheumatoid arthritis is treated by the properties of Curcumin to reduce the inflammation and the power of Vitamin C for boosting the immune system and make it work perfectly.

Curcumin and Vitamin C both are beneficial in reducing the chances of heart diseases. Both have a single goal but the pathways are different. Curcumin improves the endothelium lining of the blood vessels of the heart and provides a smooth blood flow towards and away from the heart. While Vitamin C causes two main functions.

Dementia-related to Vitamin C and Curcumin:

Curcumin is very much effective in lowering depression by releasing dopamine and serotonin which are happy chemicals. Curcumin boosts the production of BDN Factors which play an important role in memory and learning. At this point, the role of Vitamin C and Curcumin matched because Vitamin C is effective in treating dementia. Dementia is the condition of poor memory and learning and it mostly occurs due to inflammation in the brain or brain vessels. Vitamin C and Curcumin both can produce an anti-inflammatory effect as well as have the ability to improve the learning and memory process.

Vitamin C also has some unproved benefits including Cold, flu, and anti pyritic effects. The same is the situation with Turmeric but Turmeric  is being used for a long time for many centuries to
be effective against the flu, colds, rhinitis, and fever. As I have listed a lot of common functions of Vitamin C and Curcumin performing Heart, immune system, and central nervous system functions. Both increase the bioavailability of each other. Bioavailability is the amount of drug that reaches the site of action.

Manage Cookie Consent
We use cookies to optimise our website and our service.
Manage options Manage services Manage vendors Read more about these purposes
View preferences
{title} {title} {title}
0
0
Your Cart
Your cart is emptyReturn to Shop
Continue Shopping