♥ We have created a unique formula with carefully selected ingredients for all aspects of your health and vitality.

Suspended in Extra Virgin Olive Oil. Pure Encapsulation Free from Artificial Colour, No GMO or we use only vital ingredients. (Recommended Does: Take one to Two softgel daily, preferably with meal)

Ubiquinol is a special and effective form of Coenzyme Q10 (ubiquinone). Ubiquinol and ubiquinone are not quite the same things; ubiquinol needs no conversion in the body. Ubiquinol is thus directly available for bodily utilization, rendering ubiquinol more effective than Co-enzyme Q10.

Ubiquinol is available on the market under the trade name Kaneka QH®. It took a long time before ubiquinol could be produced on a large scale because it tends to easily oxidize when exposed to air and light. After more than 10 years, in 2007 the Japanese company Kaneka was finally able to develop a good, and subsequently patented, production. This was 30 years after the introduction of Co-enzyme Q10.

Ubiquinol and ubiquinone: The difference

Ordinary Coenzyme Q10 supplements first have to be reduced (converted) to ubiquinol. This conversion renders it less effective because this process is never 100 percent efficient. Aging and lifestyle factors substantially affect this efficiency. To bypass this intermediate step and to take full advantage of Coenzyme Q10, taking ubiquinol makes the best sense and is hence the best choice. Research data show that 150 mg of ubiquinol corresponds to 1200 mg of Coenzyme Q10.

Other Ways to Obtain Ubiquinol

Ubiquinol can be obtained from dietary sources:- chicken breasts, avocados and olive oil to name a few. However, you’d have to eat the equivalent of 34 chicken breasts (6oz each) or 60 avocados or 133 tablespoons of olive oil to reach the level present in just one Ubiquinol 100mg capsule!

Ubiquinol has an essential role in producing energy and has numerous health benefits, including:

If you’re just starting out with ubiquinol, and you are on (Statin Meds) start with 200 to 300 mg per day. Within three weeks, your plasma levels will typically plateau to its optimum level. After that, you can go down to a 100 mg/day maintenance dose.

This dose is typically sufficient for healthy people. If you have an active lifestyle, exercise a lot on Statin, or are under a lot of stress due to your job or “life” in general, you may want to increase your dose to 200mg/, by taking two softgels daily. 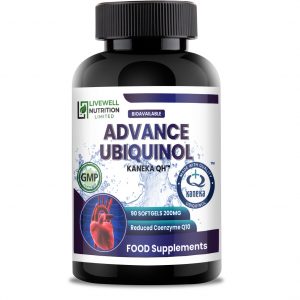